By 2050, there would be 2.2 billion people in Africa, Mr Kabira said, and 1 billion of them would be middle class. Such seismic demographic changes, he believed, offered significant opportunities for Australia in the areas of food security, agribusiness, minimising post-harvest losses, youth and agriculture, application of research findings, reforms in the education sector, training market-ready graduates, and leveraging information and communications technology. 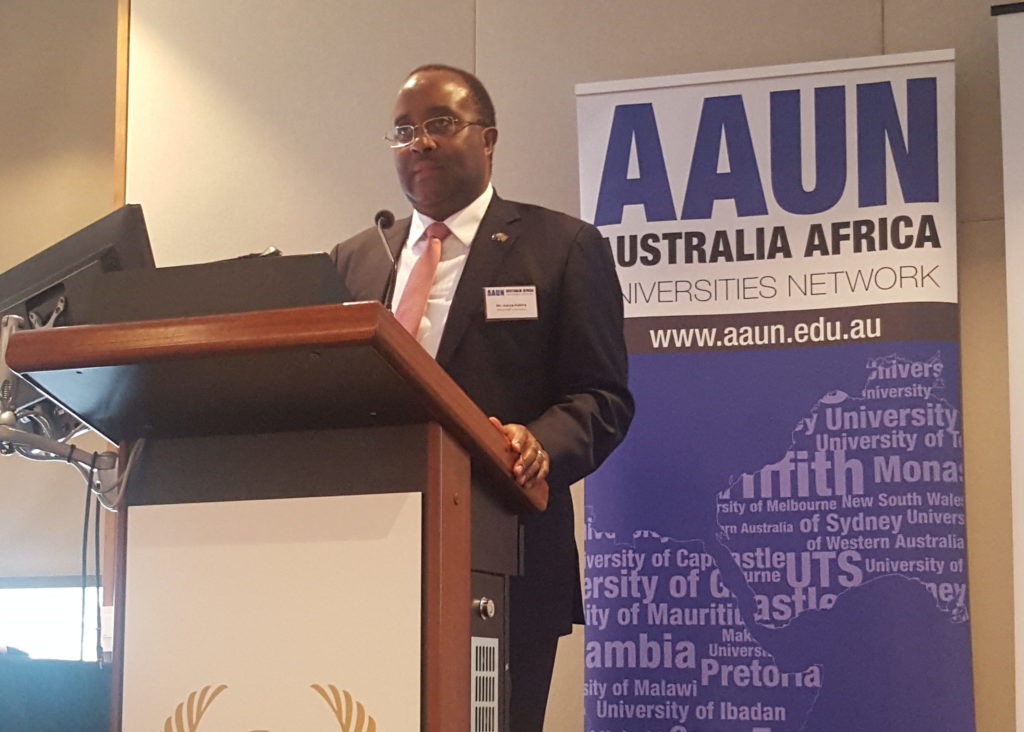 “Agriculture is the primary source of food and income for many Africans, providing up to 60 per cent of all jobs,” he said.

“So, apart from capacity building, Australia should look to export its high degree of expertise in facilitating agriculture in challenging environmental and climatic conditions in Africa to help the population commercialise its agriculture.”

Given that 50 per cent of Africa’s population were young people who needed jobs, Australia could also help change the perception of agriculture to make it “cool” and seen as a field young people would want to be involved in.

“In East Africa, economic losses in the dairy sector due to spoilage and waste costs US$90 million a year. In Kenya, each year around 95 million litres of milk, worth around US$22.4 million, are lost.

“Australia and Africa can work together on technologies and storage facilities to address these losses across the continent.” 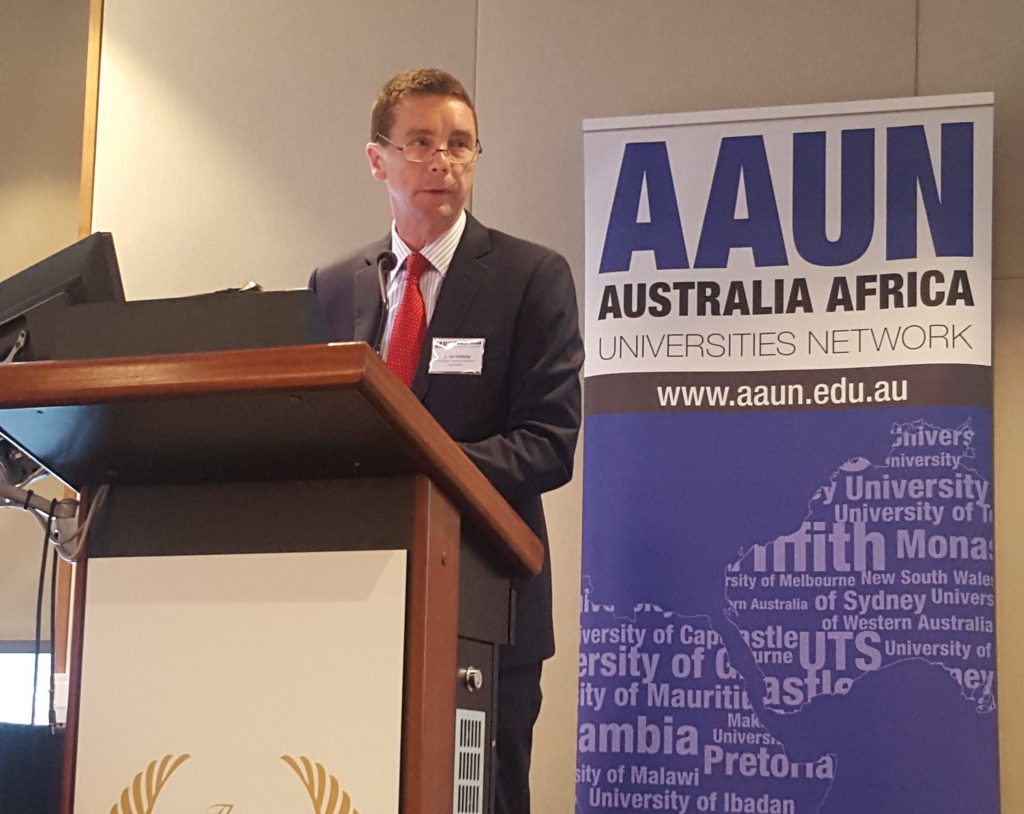 Research networks like AAUN were competing for dollars and people, which meant targeted activities that solved real problems of relevance and brought sustained improvement in the lives of local people and their environments were critical.

Mr Halliday said 50 per cent of Africa’s population was currently less than 20 years old, and 200 million students were eligible for tertiary education. By 2050 that number would reach 800 million – which meant the opportunities and challenges were plentiful.

One pivotal opportunity to promote Australian-African relations is Expo 2020, which starts next October in Dubai and will run for six months. African nations are among the 193 countries participating, as is the Australian Government.

“This wonderful platform and forum will give us the chance to see what we can do to raise the profile of Australian-Africa relations, and identify trade and educational opportunities.” 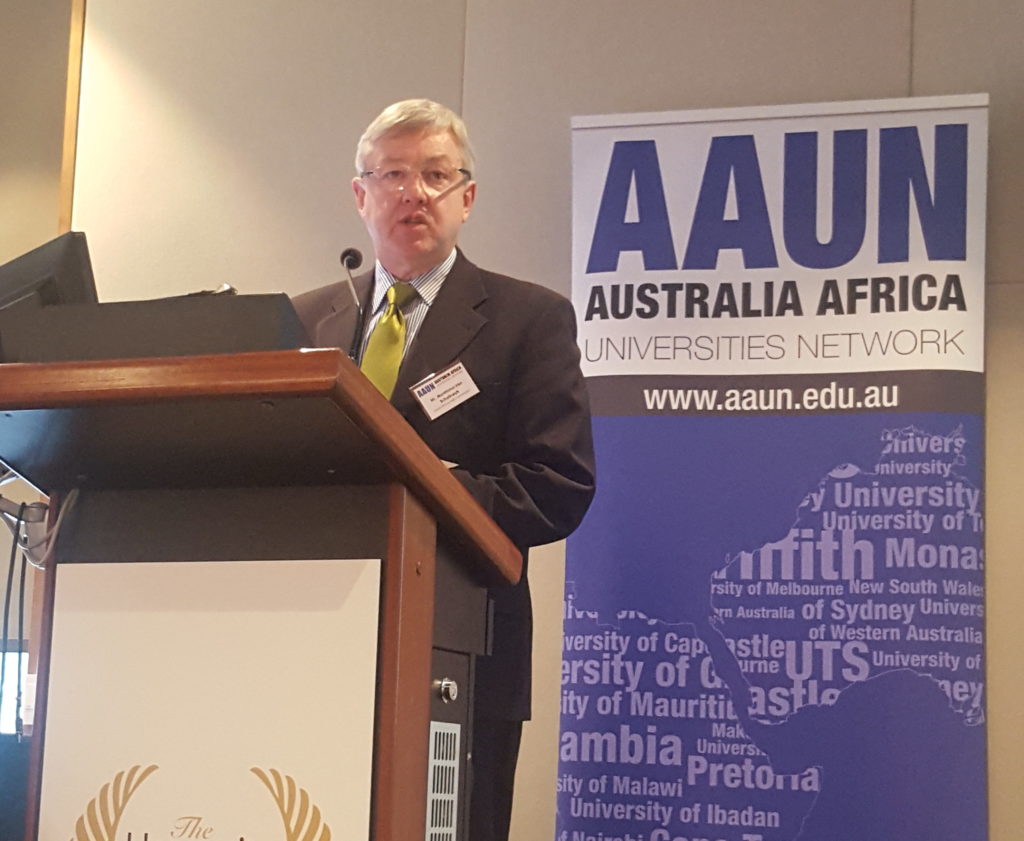 HE Marthinus van Schalkwyk, High Commissioner of South Africa, said assistance to deal with the country’s “inadequate, diminishing and inequitable postgraduate pipeline” was a high priority for South Africa’s collaboration with Australia.

Joint research projects related to biodiversity and the development of climate-resilient crops would also be mutually beneficial given that Africa and Australia were both water-scarce countries creatively trying to find solutions to a problem that would only become more severe.

“We have more than enough research at universities, other institutions, government departments, on [climate change] mitigation,” Mr van Schalkwyk said. We know what we have to do. We know what the battles are. We know what the challenges are. But it is on the issue of adaptation that there is still a lot of potential – and especially in the development of more drought-resistant varieties.”

Charting a path to greater impact 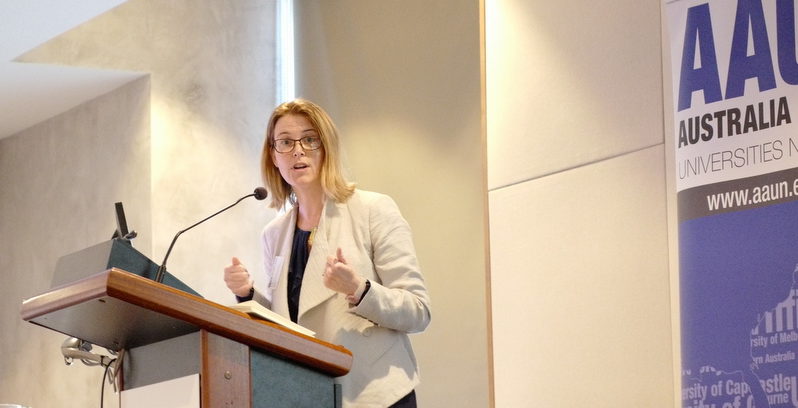 HE Jenny Dee, Australian High Commissioner to Mauritius, said forging partnerships between Africa and Australia was not easy, so taking a strategic approach had become increasingly important.

“You’ve heard how challenging it actually is to garner the interest of business and even levels of government on Africa. What more could the AAUN do, and your institutions do, to influence policy makers, or make an impact?”

Ms Dee said charting a path to greater impact should include asking: Could the Australian Alumni associations that existed in many of the countries across Africa be leveraged? Were they using the advisory group on Australia Africa relations well? Could the model that was used recently in Mauritius – where the Commonwealth Universities Network summer school was run just before the AAUN conference – be a potential model for AAUN to encourage young researchers?

AAUN’s increasing focus on the blue economy was one area in which the network could garner the Australian Government’s attention, and really help the Indian Ocean, she said.

“The University of Western Australia under the Tertiary Education Commission of Mauritius is working with the University of Mauritius and a hotel chain about beach erosion and coral reef regeneration. So, I expect there would be models out there in your countries in Africa, and in Australia, that could be leveraged, bringing in the private sector.”

Ms Dee said an international collaboration under the Mauritius Research Council had been working with Queensland University of Technology on sugarcane waste bioplastics, and Africa’s emerging digital economy was also having an impact on a range of sectors in which Australia could invest as a partner.

“Technology is key, of course. Are you utilising that enough in terms of pushing your research priorities? And, lastly, are those resources sustainable? What else could be utilised?”