The Australia Africa Universities Network (AAUN) Annual Forum and AGM, held in Perth on 27 August 2018, brought together more than 100 Australian and African experts from academia, government, diplomats, business and agencies. The purpose was to examine the strengths of AAUN and to further explore ways to extend its impact at this pivotal time for Australian and International policy development. Focus is in the areas of environment, food and nutrition security, higher education and employment, aligned to the global policy frameworks of the SDGs, Belt and Road Initiative, Indo Pacific and African Union Agenda 2063.

The AAUN Forum has strong ripple effects in research and education, exchange and business partnerships. The main theme this year is “Australia Africa Teamwork for Education and Economic Sustainability” in the areas of AAUN research.

In accordance with the Forum theme, the discussion in the four Sessions focused on: knowledge diplomacy; knowledge partnerships for policy development with regional and global policy frameworks; the priorities for Australian and African Universities to engage with research and education in its focus areas, and the instruments for engagement and how AAUN can extend them. There were two parallel Round Table Meetings during the lunch session held by Worldwide Universities Network Global Africa Group and the Australia Awards and Alumni Group to seek synergies and partnerships between the networks and to engage young scholars from Africa with the AAUN scholarly community and research programs.

The forum also included a launch of the AAUN – ACIAR (Australian Centre for International Agricultural Research) Partnership 2018–21 (read more); and a farewell to AAUN Co-Chair (Africa) Professor de la Rey who has served as Co-Chair since 2012 (read more).

Snapshots of the Day

In the Opening Session, the Forum also highlighted the launch of the University of Western Australia (UWA) Africa Research and Engagement Centre (AfREC) and signing of the UWA–University of Pretoria Memorandum of Understanding. read more

Hon Professor Kwesi Yankah, Minister of State for Tertiary Education in Ghana, said the African academy had suffered for many years from “global stereotyping based on perceptions of lethargy and lack of intellectual rigor on the continent”.

In 2017, he said, Ghana had established a free senior high school policy. By 2020, when the first batch of these senior high school students is due to graduate, universities will be expected to cater for more than 150,000 extra students heading their way. “This is an opportune moment for Australia, whose best university is number 32 in global rankings, to partner with Ghana, whose number 1 university now places below 1,000 in world ratings. 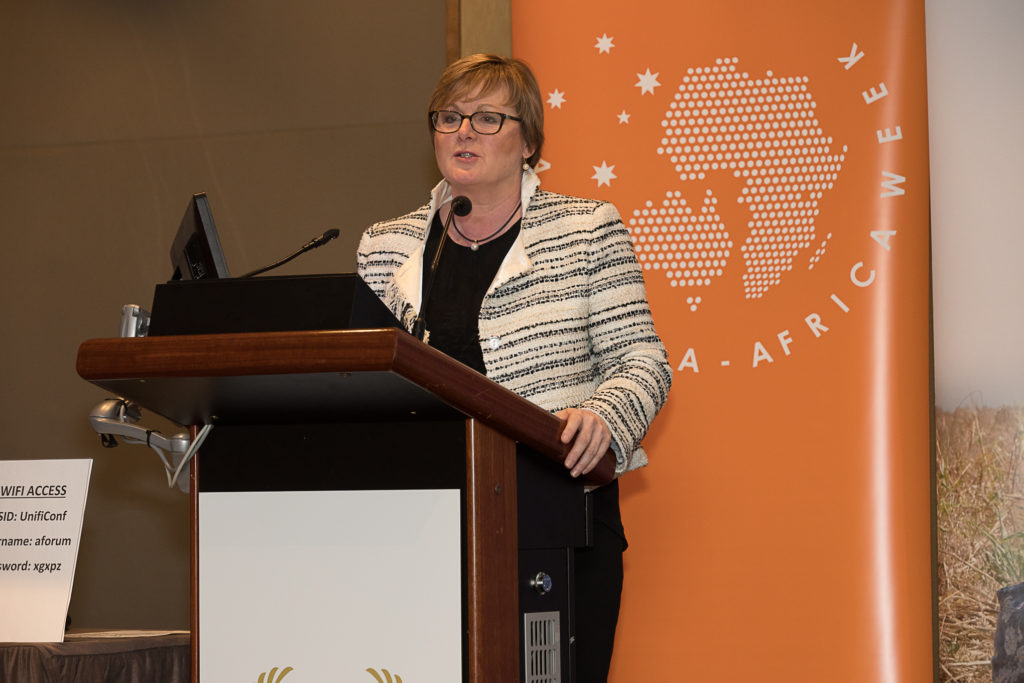 Senator Linda Reynolds CSC, Senator for Western Australia, Chair of the Standing Committee on Foreign Affairs Defence and Trade. Senator Reynolds said that global geo-strategic changes are causing Australia and other liberal democracies to consider our role in the Indo-Pacific region. Australia will deepen relationships with countries throughout the region in partnership with Japan and the United States. Senator Reynolds also spoke of opportunities for Australian industry across Africa, and the priorities for education and development in meeting the UN Sustainable Development Goals. 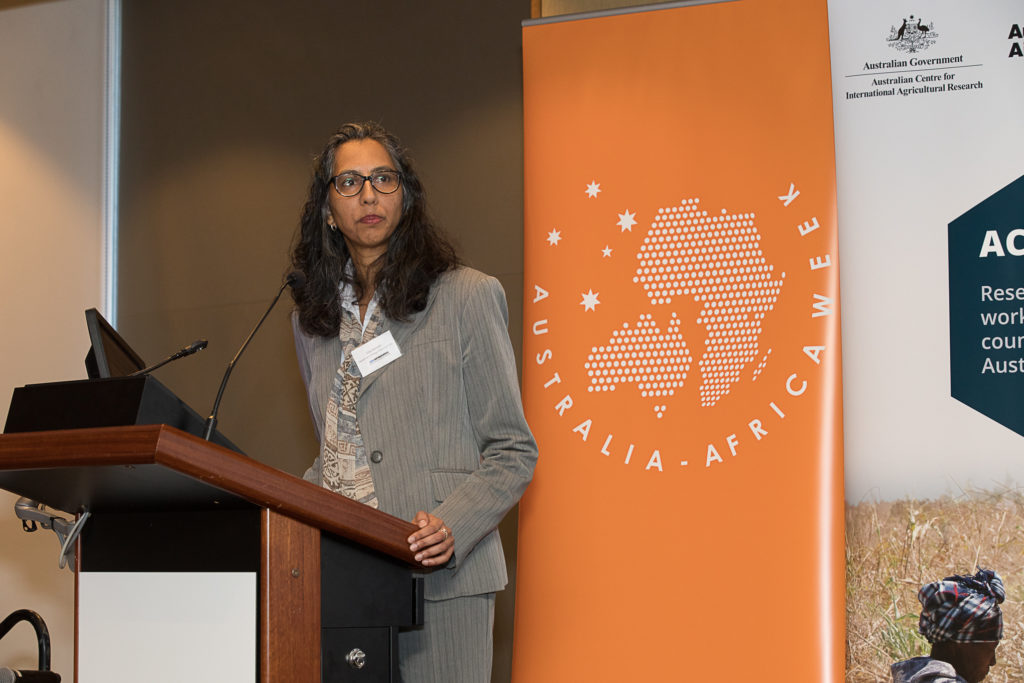 Ms Gita Kamath, Assistant Secretary, Africa Branch, Department of Foreign Affairs and Trade (DFAT), agreed it was vital to get Australian companies to “turn their heads and look towards Africa beyond mining”.

Diversifying research in ways that would bring the private sector into partnerships was crucial, she said, as was engaging with governments to ensure the outcomes of research would be reflected in policy. “There’s quite a big research program on agriculture in the AAUN. How is that being linked back to the private sector? Because it’s the private sector that’s going to bring in some of those innovations.” 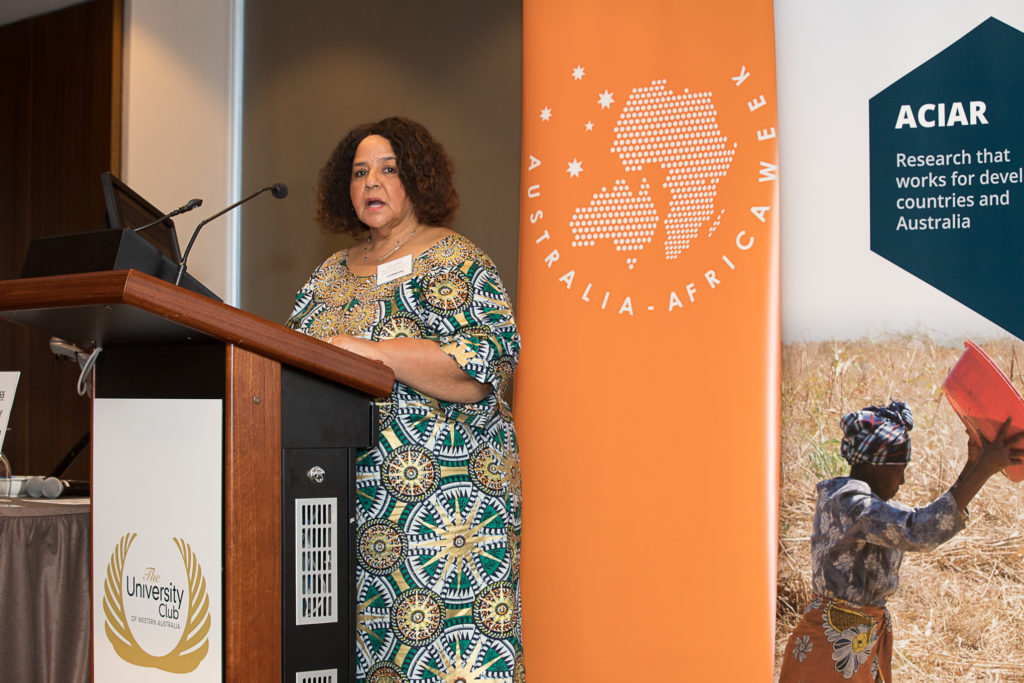 Her Excellency Ms Beryl Sisulu High Commissioner of South Africa to Australia said Africa is the second fastest growing region in the world and an investment destination with significant unrealised potential. “The value of strategic relationships such as the AAUN is crucial for our continent to prosper.” 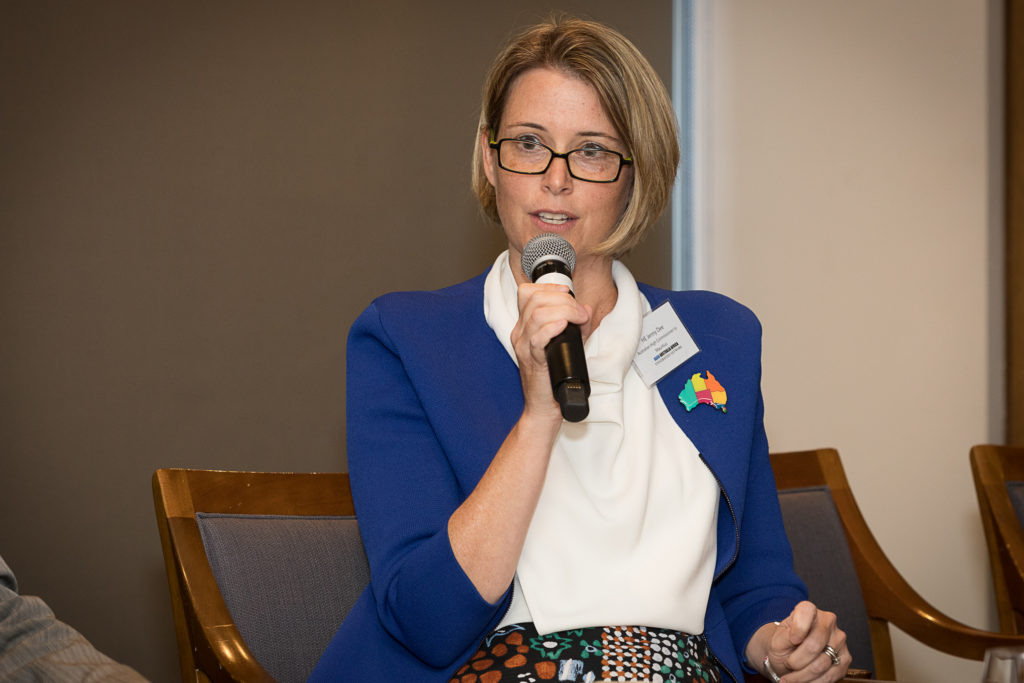 Blue Economy is also a growth sector, she said “We’ve been doing quite a bit of work with a strong climate adaptation theme looking at blue carbon, coral reefs, and more – so I’d encourage further work in that space. What I say about the Indian Ocean in my advocacy is that it doesn’t divide Australia and Africa. It brings us closer together.” 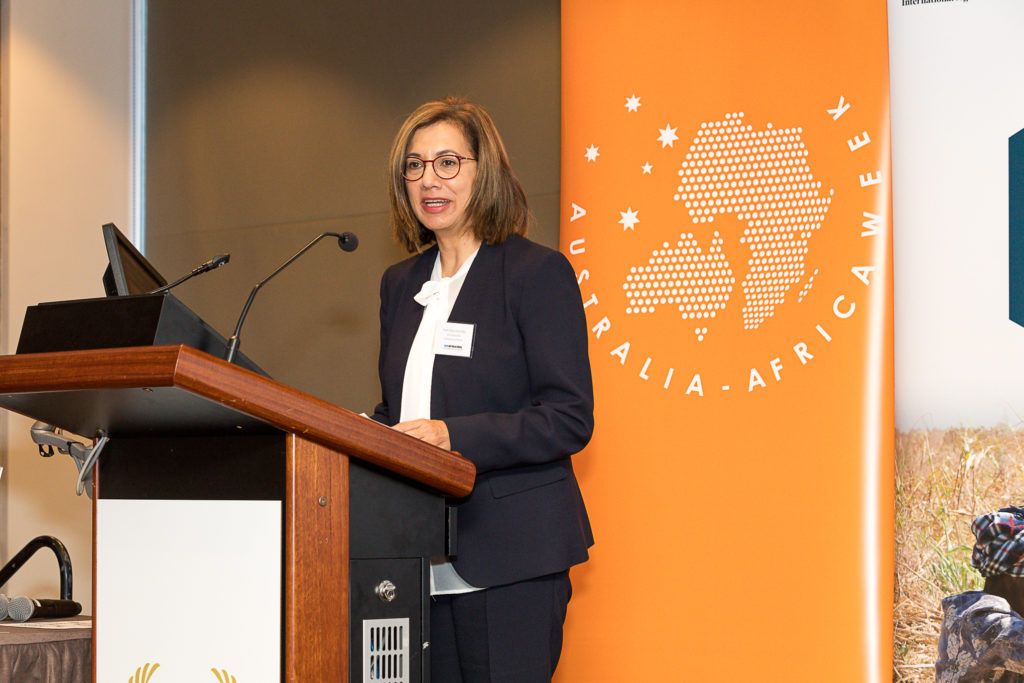 Professor Cheryl de la Rey, Vice-Chancellor of University of Pretoria, and AAUN Co-Chair Africa, said that networks like AAUN could provide leadership in the emerging area of science diplomacy by mobilising their scientific expertise and using their collective voice to promote science in society and to influence public policies at local and global levels. 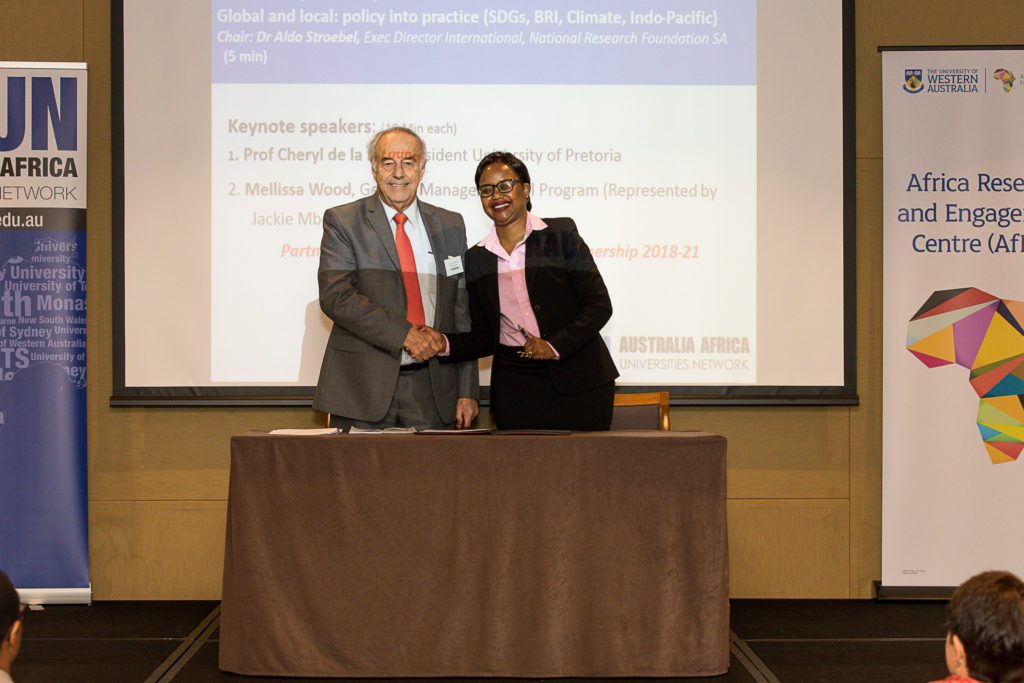 A forum highlight was the launch of the AAUN – ACIAR (Australian Centre for International Agricultural Research) Partnership 2018–21. Professor John Hearn, AAUN Co-Chair, said this knowledge partnership represented a significant commitment to continued collaboration over the next four years on projects of benefit to Africa and Australia. Read more

University Presidents and research leaders commented on Australia-Africa partnerships and their vital role in intercontinental advances. 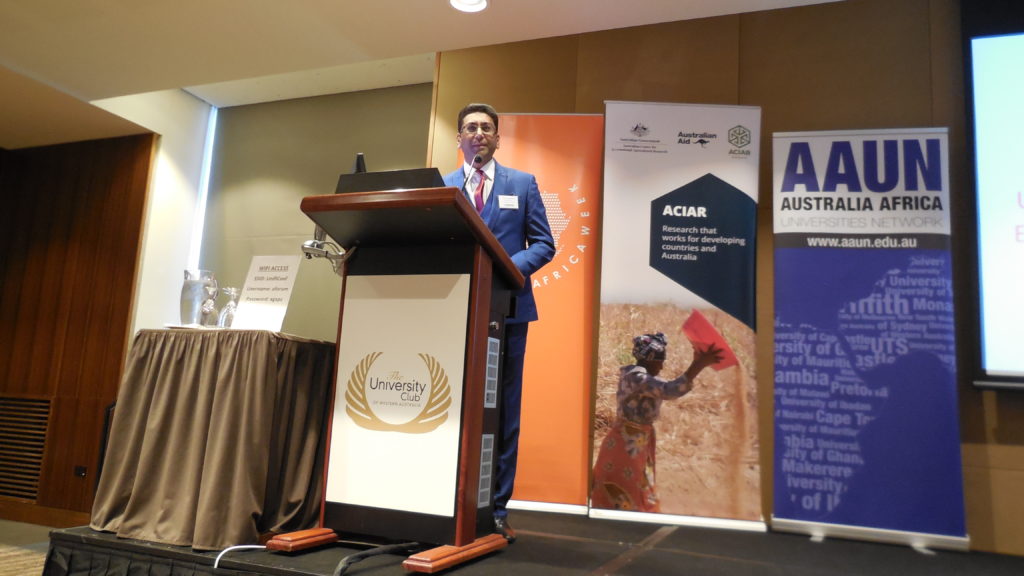 Professor Dhanjay Jhurry, Vice Chancellor of the University of Mauritius (UoM), said he was advocating new thinking for UoM – positioning it as a research-engaged, entrepreneurial university – “a new model” closer to business and different to most universities in the north. He looks forward to playing an active role in the exciting teamwork with AAUN. 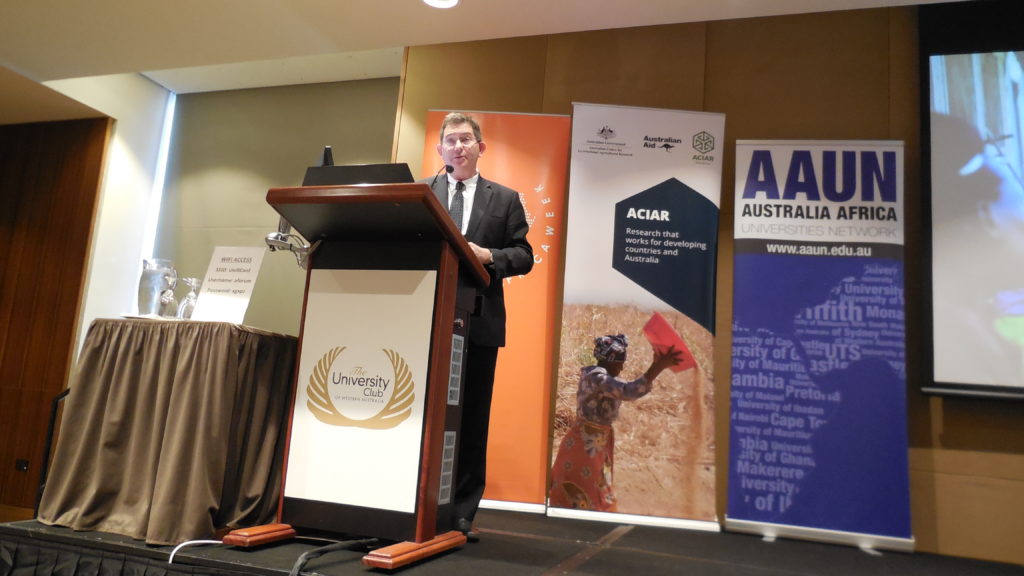 Professor Ian Jacobs President and Vice Chancellor of the University of New South Wales (UNSW) said that the new wealth of nations is education and that as Australia looks forward to the next 20 or 30 years it should also look back at history.

“Australia worked really hard to develop links with China; and it is now our biggest economic partner. I believe that in 10 or 20 years, Africa will fill that role.” UNSW Sydney has committed to a major partnership program with Gulu University in Uganda.

Session 4: Instruments for engagement – what works and what does not?

Mr David Doepel, Chair of the Africa Research Group, Murdoch University and Chair of the Africa Australia Research Forum (AARF) said universities can play a pivotal role in research and education to facilitate the genuine creation of lasting value from the extraction of minerals from Africa. The communities that develop around mineral programs also profit from research in education, farming and business. 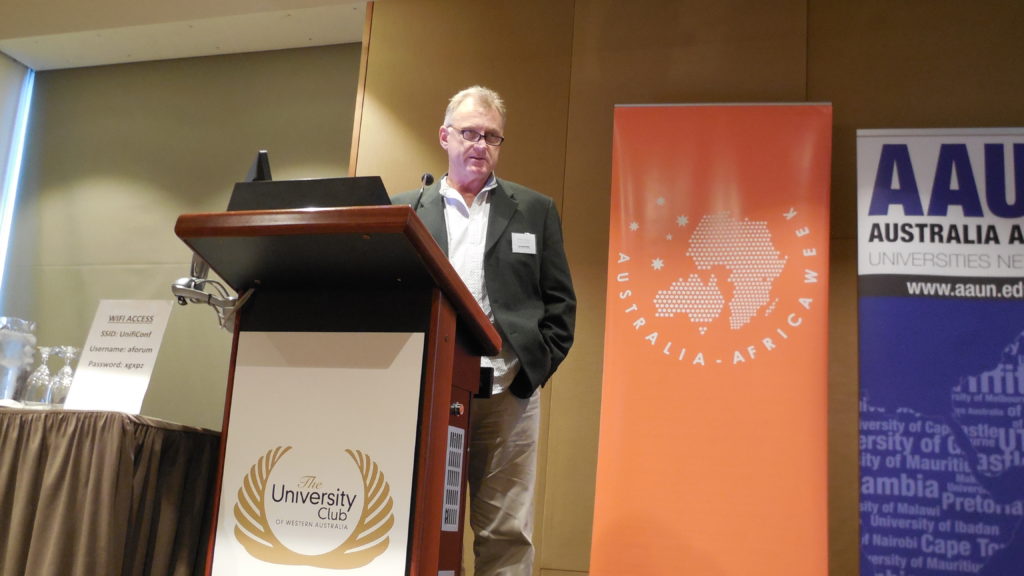 Dr Peter Johnston, Climate Impacts Researcher from the University of Cape Town (UCT), showed that from 2080 to 2099 most parts of Africa and Australia would be experiencing between 50 and 200 days per year above 35 degrees. “It’s not just people dying,” he said. “People can die anywhere. It’s going to affect agriculture, it’s going to affect staple foods like maize.”

Thanks to AAUN, he said, six universities were now collaborating on a research project called AAUN-FLoRET: Future Legumes Research, Education and Training programme – which links climate change and nutritional needs to agriculture and will provide new initiatives to mitigate some of the effects of climate change. 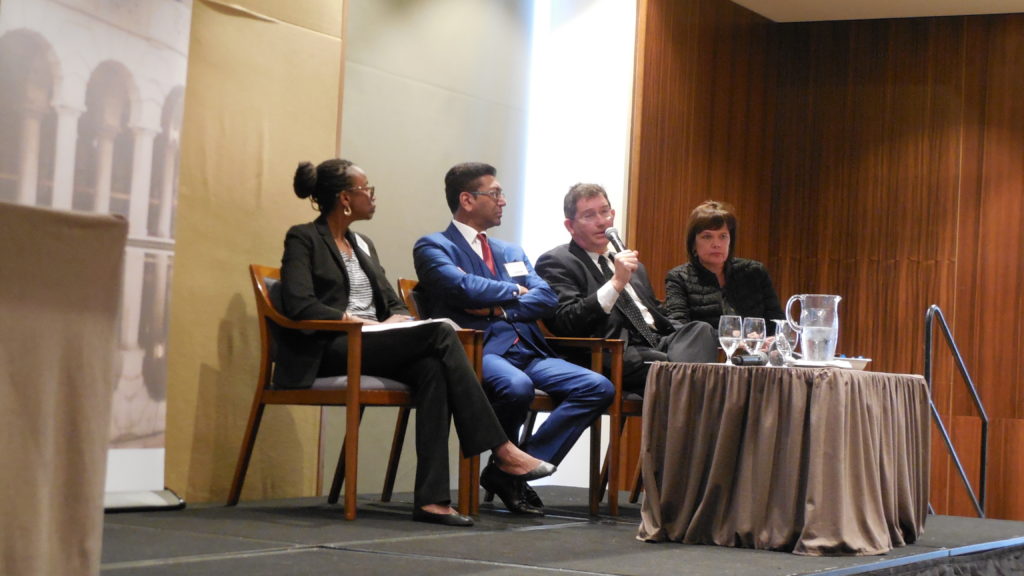 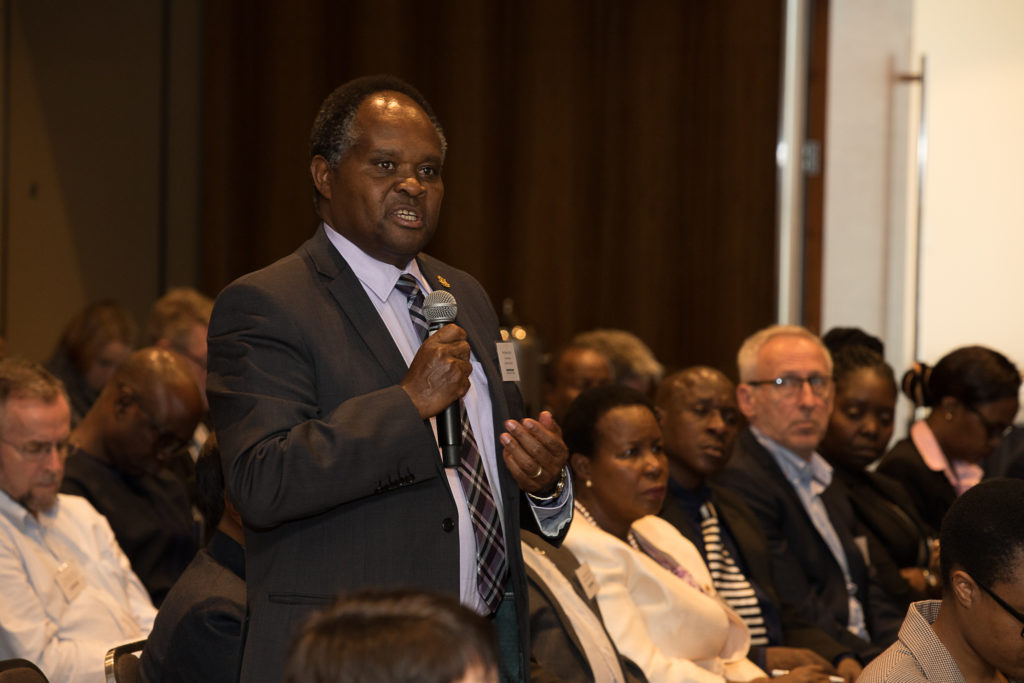 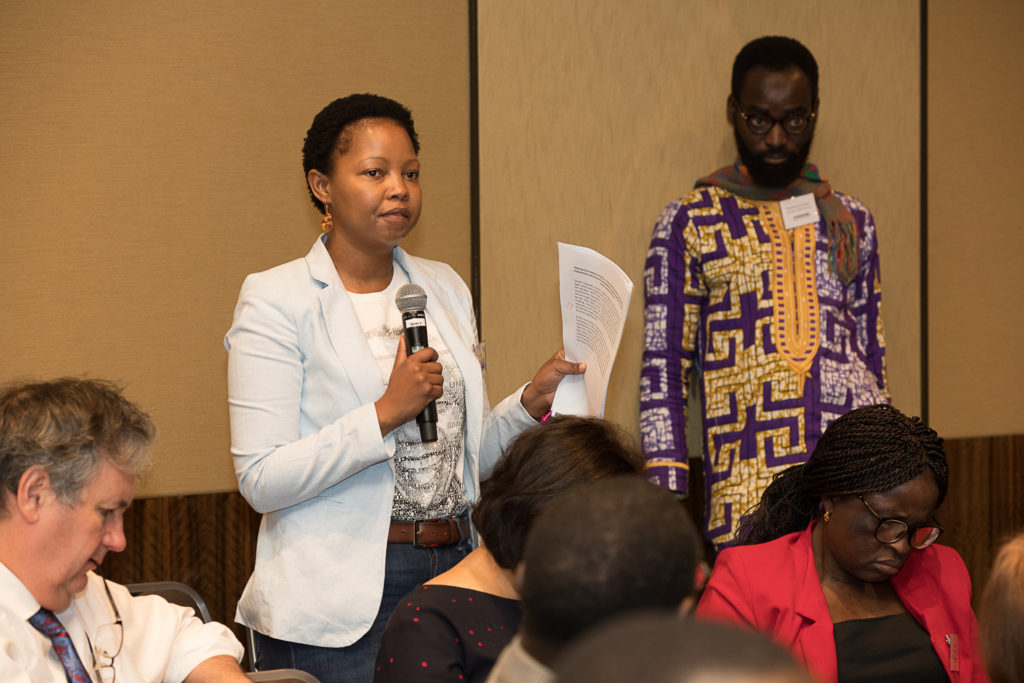 Other issues raised by forum speakers and panelists included gender equity, land use, tapping the knowledge of the African diaspora in Australia and the Australian diaspora in Africa, multidisciplinary approaches to research – including how to incorporate sociology into projects, harnessing the talent of alumni (including recipients of the Australia Awards).

In conclusion, Professor John Hearn, the AAUN Chairman, pointed out this year the AAUN forum had examined the network’s strengths, and how to build on them. This included assessing the equal African-Australian partnerships the network has established with its knowledge partners ACIAR, DFAT and the South African National Research Foundation across 43 research programs – with a particular consideration of how they can augment the work of AAUN over the next three years. “We’re keen to have more impact on agriculture, health, education, and employment – and more sustainability. We seek to build greater effectiveness and impact, and to attract sustainable resources from national and international agencies.”

View/download the Participants Bios and Abstracts

Global and local: Science for policy and the role of networks

Building a sustainable peace in Africa: a critical look at SDG 16

Land use challenges in Africa and Australia: shared solutions 2030