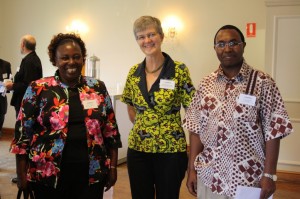 The AAUN showcase brought together researchers from different disciplines to talk to leading African organisations.

Australian academics continued to strengthen their partnerships with Africa when they met at the Australia Africa Universities Network showcase. It was held at the University of Sydney this week as part of the launch of the Australian International Food Security Centre.

As part of the conference, they toured the University of Sydney’s facilities, including the Faculty of Veterinary Sciences and the agricultural labs in the state-of-the-art Australian Technology Park.  They also heard a presentation from the newly established Charles Perkins Centre.

The AAUN is committed to growing long-term partnerships between Africa and Australia, and the conference fostered new connections between both continents.

The presentations made during the showcase are now available online!